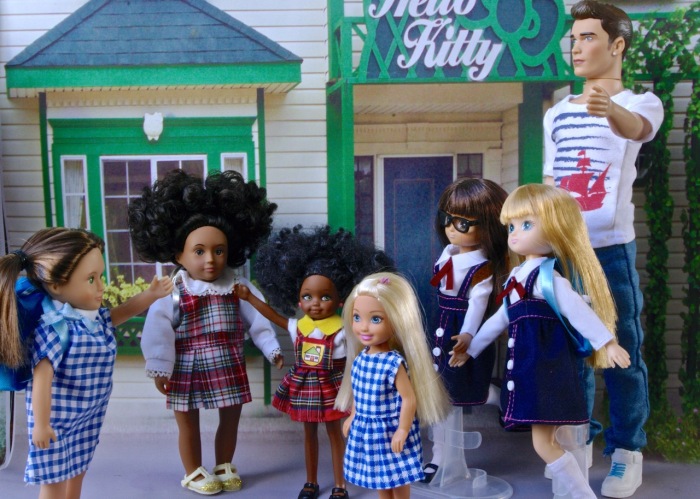 September means back to school for the young people of the West End. There are several schools in the village, including a very exclusive independent school, Saint Gertrude’s, which offers Reception through Sixth Form, and several state schools. The children who attend Saint Gertrude’s are easily identified through their tartan uniforms. Lara’s husband Josh, stay-at-home dad, helps his friends out by walking all the smaller children to school, no matter which school they attend. The other parents, most of whom must leave early for work, really appreciate this. After dropping off the children, Josh will shop and clean, pick the children up, and then prepare an evening meal for the family. 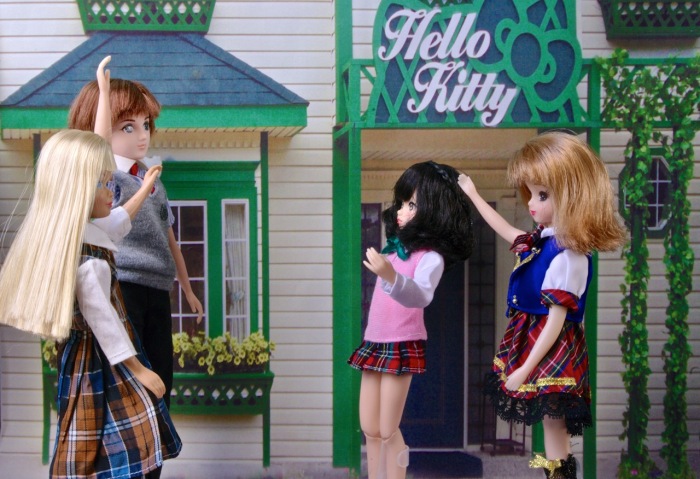 Ruruko and Rikki both attend Saint Gertrude’s and say goodbye to their friends Hari and Skipper at the turn off to the school. Skipper attends West End High School and Hari takes the bus to the exclusive Roberts Academy.

Alistair hangs around the High Street close to the entrance of Saint Gertrude’s. He’s been expelled from his school in Germany and sent to live with his brother Kevin and Kevin’s extended family. He’s not particularly thrilled about it. As he debates whether to go in or not, another student his age approaches. Dexter is back in Sixth Form and stops when he sees a new face.

“Hullo,” he says in surprise, “Are you new? I thought I knew everyone in the school! I’m Dexter Delaval, by the way. Nice to meet you.”

“Are you related to Kevin Puppe who runs the George?”

“Fantastic! My band plays there on a Saturday night!” It isn’t really Dexter’s band, so to speak, but that doesn’t matter at the moment.

Suddenly Jenny joins them and Dexter introduces her to Alistair.

“Is this your girlfriend?” asks Alistair bluntly. Jenny blushes.

Kurhn arrives and Dexter introduces her to Alistair as well. “Kurhn doesn’t go to Saint Gertrude’s, she goes to the Sixth Form at West End High School,” he explains.

“Hi,” says Kurhn. “Listen, Dex, I can’t meet up after school. I’ve got a voice lesson with Nicole. Why don’t we all meet up for a study date tonight in the library after tea?”

Alistair is completely dumbfounded. His academic career has been far from stellar thus far and he’s starting to understand why his brother insisted that Saint Gertrude’s would be just the thing. Study dates in the library? Could anything sound more tedious? He wonders just to what lengths he’s going to have to go to fit in and make new friends.

Once school gets underway, the High Street clears out until the shops open. Marcelo and Luna are going for a stroll when they bump into Audrey. She does not appear to be pleased to see them.

“My darling, look at you,” coos Marcelo. “You look fabulous, as always. Black and white suits you perfectly and look, you match me. Great minds think alike, wouldn’t you say?”

“I could not be less impressed, Marcelo,” says Audrey coldly. “You haven’t responded to a text or a phone call for a month. I’m sick of you, I’m sick of this relationship and it is over. Completely.”

Marcelo is completely unfazed. “Oh, what a shame, my love. I’ve been very busy with the band, you know. But, as you wish. And here we are wearing such complementary outfits.”

“You truly are pathetic,” says Audrey and walks away.

“Bitch,” mutters Marcelo under his breath.

Elsewhere, the day is off to a better start. Mira has not ended her relationship with Tommy but is taking a break. She’s teaching a one month intensive yoga course called, “Beyond Asana: Yoga’s Eight Limbs,” and has told Tommy that she needs some mental space while she’s teaching it.

Midge’s pregnancy is advancing without difficulty and she goes to the Medical Centre for a checkup. Roberta has started her new nursing job and listens to the baby’s heartbeat.

“I’d like to talk about the birth,” says Midge. “I’m wondering what the options are and whether I can have the baby at home, even though it’s my first.”

“You certainly can,” says Lara. “Roberta and I can attend you at home as easily as we can attend you here. If there are problems, we will have to get the helicopter to come either way. The alternative is a long drive to the city. The only issue will be that we can’t administer anaesthesia at home and you will have to give birth naturally.”

“Many people think that until they’re in the throes of labour,” laughs Lara. “But if anyone can it will be you. I would recommend that you send Sasha over to ours when your labour begins and let her stay with Lottie and Alexandra because we don’t want her to be frightened if you start to yell.”

Alistair is not the only new face among the West Enders. Deangelo’s brother Diondre has started his new job in sales and promotion for Barbie’s latest venture. It’s a fashion house called The Barbie Look, self-contained, with designer Liu Liu Ling, an in house photographer, and a group of well known fashion models. Barbie has hired Emma as creative director and is hosting a private launch party in the pub.

Diondre and Deangelo have always excelled in everything they do and Diondre is not particularly surprised to have landed such a fabulous job. He has to admit, however, that being surrounded by some of the country’s top models is slightly intimidating. He will not let anybody see that, however. He remains cool as can be, as if he has spent his entire life among supermodels.

And a lovely group of beautiful woman they are – Ivana Panenka, Michelle Jones, Salynda Wong, and Ariadne Kostopoulos.

Lavinia’s older daughter, “plus sized” model Faith Devine has joined the Barbie Look as well. She chats with designer Liu Liu Ling and Lilli Akana, who has left Tommy’s employ to work as Barbie’s PA.

Ken is Business and Finance Director, and chats at the bar with Liu Liu’s partner, Sam’s brother Jamie, the in house photographer.

There is another person feeling just slightly out of her depth, along with Diondre. It’s Momoko. She’s finished her degree and this is her first “real” job. She’s working as an design intern. She chats with the “petite” model, Kitty Collier, who is very friendly and does everything she can to make Momoko feel at home in this new environment.

So one relationship has ended, another is on hold – but what about Sutton and Erika? Will she forgive him for that selfie? Stay tuned to the next episode to find out!

~ even more fantastical tales on a small scale

Mostly a soap opera at 1:6 scale, with an occasional interlude.

MINIATURES PAST AND WAY BEYOND

Jenjoy's All Dolled Up Page

All about teenage fashion dolls

The continuing tales of vintage Sindy, Action Man and friends

A blog about waking up, motherhood, & living in an age of climate change.