It’s almost the end of January, but it’s also the beginning of a new year, the Spring Festival, and the Chinese New Year of the Fire Rooster! As with many Chinese students abroad, Kurhn talks to her family via Skype, bringing them up to date on her studies, where she is going to apply to do medicine, and catches up with her family’s activities. But then, there are all the things that she doesn’t tell them…

Kurhn is really excited! She is taking voice lessons after school with Nicole, who is incredibly encouraging and tells her she has a wonderful voice. Nicole urges Kurhn to debut publicly at the Saint Valentine’s Day Ball, the biggest event in the dolls’ lives after Christmas. Jake will be playing piano to accompany a jazz singer, but Nicole assures Kurhn that she can do a couple of numbers as well. Kurhn is both ecstatically excited and terrified. She’s also feeling a bit of guilt about not telling her family how much she wants to study music instead of medicine.

It’s a quiet Saturday afternoon at the George. Barbie and Sandra are enjoying a couple of the George’s famous martinis and catching up.

“You look so pensive, Sandra, what’s up?” asks Barbie.

“Oh, I just told Steven that I would go to the ball with him,” replies Sandra. “And I don’t know why. He’s been so persistent, constantly asking me out, and I guess I finally just gave up and said yes. But all he does is talk about himself or when he talks about me, all he talks about is how beautiful and sexy I am. He seems to have absolutely not the slightest interest in me as a person.” She sighs.

“I wondered when you turned up with him on New Year’s Eve,” says Barbie. “Kevin says the George is going to put on an ‘All the Single Ladies’ party. Maybe you should have opted for that.”

In the corner, Liam and Sam are enjoying a pint and also discussing romance.

“You’re looking happy – or is it smug?” says Liam.

“I am happy. And a bit nervous. I’m going to ask Midge to marry me.”

“And I think I’m going to look into converting to Judaism.”

“WHAT? You aren’t even religious, and Midge doesn’t seem to be. Are you nuts? Do you even believe in God?”

“I don’t actually know,” confesses Sam. “But Midge will want our children to be raised as Jews and I want to be a part of the lives of my children.”

“For crying out loud, you haven’t even asked her yet and you’re going on about children. I don’t know mate, I think you’ve lost the plot.”

“You’re just jealous, kid, ’cause you can’t even get lucky.”

“Have you ever thought of asking a woman out for meal, or even a cup of coffee, instead of just hanging around in the pub waiting for someone to fall all over you?”

“Aw, now you’re getting personal!” They both laugh. 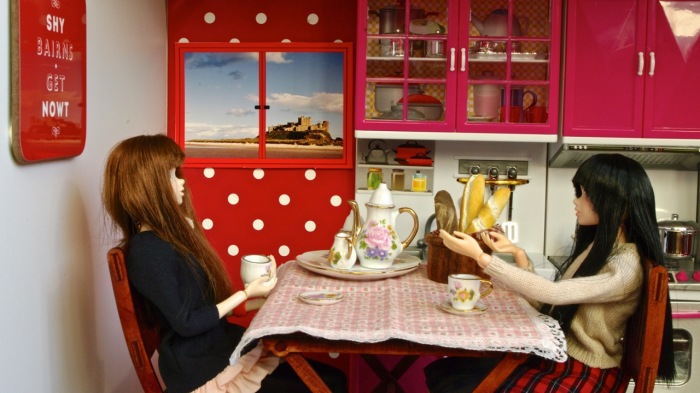 Back at the house, Momoko and Yuki are also catching up.

“What? How can you be jealous? What are you talking about!”

“Well, I know you spent the night with him and not just that once. I keep trying to seduce Ryan but deep inside he’s still got so much of the monk in him. He keeps putting me off, and talking about the Buddhist view of sensual pleasure, craving, and desire. I tell him I have no problem with craving and desire – I desire him!” She laughs.

“I know what you need,” says Yuki. “You need my nightgown.” She tells Momoko about her night with Nick and her sexy nightgown. Momoko is intrigued.

“Okay, let’s make a Valentine’s Day dinner for our boyfriends, and I’ll go upstairs afterward and get into the magic nightgown,” says Momo. “You can send Ryan upstairs and we’ll see what happens.”

“It’s a plan!” says Yuki. “After all, you know what it says on the wall behind you – Shy bairns get nowt!”

Later that evening, Mira makes dinner for Tommy to celebrate the new year before they head to Chinatown for the parade and fireworks. They’re really enjoying each other’s company and Tommy wastes no time inviting Mira to the ball.

In the meantime, Emma is scheming about how to get Sutton to invite Monique. Monique would be furious if she knew! Don’t miss the next episode when we keep track of Emma’s matchmaking efforts.

MINIATURES PAST AND WAY BEYOND

Jenjoy's All Dolled Up Page

All about teenage fashion dolls

The continuing tales of vintage Sindy, Action Man and friends

collectible dolls from the 1940s to the present

A blog about waking up, motherhood, & living in an age of climate change.